Wikipedia, Facebook, Twitter, and mainstream media are falling all over themselves with censorship and spin jobs to get the narrative back under control as mass protests continue to sweep across America.

In 2017, representatives of Facebook, Twitter, and Google were instructed in a US Senate Judiciary Committee hearing that it is their responsibility to “quell information rebellions” and adopt a “mission statement” expressing their commitment to “prevent the fomenting of discord.”

“Civil wars don’t start with gunshots, they start with words,” the representatives were told by cold warrior think tank denizen Clint Watts. “America’s war with itself has already begun. We all must act now on the social media battlefield to quell information rebellions that can quickly lead to violent confrontations and easily transform us into the Divided States of America.”

“Stopping the false information artillery barrage landing on social media users comes only when those outlets distributing bogus stories are silenced — silence the guns and the barrage will end,” Watts added.

Those words rattle around in the memory now as America burns with nationwide protests demanding an end to the police state, and as narrative control operations ramp up with frantic urgency.

Wikipedia formally censors The Grayzone as regime-change advocates monopolize editing@BenjaminNorton on how a cabal of editors got us listed as a “deprecated source” entirely on the basis of our political views and in violation of Wikipedia guidelines https://thegrayzone.com/2020/06/10/wikipedia-formally-censors-the-grayzone-as-regime-change-advocates-monopolize-editing/ …

1,139 people are talking about this

A group of right-wing Venezuelans have managed to blacklist @MintPressNews, @TheGrayzoneNews, @venanalysis and @telesurenglish, among others, from Wikipedia citations. https://www.mintpressnews.com/project-venezuela-right-wing-activists-push-wikipedia-blacklist-mintpress-news/268534/ …

Right-wing activists have managed to ban the use of a range of alternative media by covering Venezuela on Wikipedia, including MintPress News

182 people are talking about this

The Grayzone reports that it has been blacklisted as a source on Wikipedia following a concerted campaign by a suspicious-looking group of editor accounts, many of whom appear to have ties to the right-wing opposition in Venezuela. Wikipedia, whose co-founder once told the US Senate that the online encyclopedia project “may be helpful to government operations and homeland security”, has added The Grayzone to a very short list of outlets that are never to be used under any circumstances, claiming on apparently no basis whatsoever that it publishes false information.

“In fact, in its more than four years of existence, including its first two years hosted at the website AlterNet (whose use is not forbidden on Wikipedia), The Grayzone has never had to issue a major correction or retract a story,” Grayzone’s Ben Norton says in its report on the matter. Norton documents how the Wikipedia editors are unable to cite any actual false information in any of the outlet’s publications in their arguments, leaving only their objection that Grayzone doesn’t parrot US government-approved narratives like The New York Times, Bellingcat, and Wikipedia’s other designated “reliable sources”.

Norton also notes how Wikipedia has designated the leak publication outlet WikiLeaks an unreliable source despite its nearly 14-year record of authentic publications. Wikipedia designates WikiLeaks as “generally unreliable,” making the utterly baseless claim that “there are concerns regarding whether the documents are genuine or tampered.”

“The internet encyclopedia has become a deeply undemocratic platform, dominated by Western state-backed actors and corporate public relations flacks, easily manipulated by powerful forces. And it is run by figures who often represent these same elite interests, or align with their regime-change politics,” Norton writes.

Norton’s breakdown of the ways Wikipedia is slanted to consistently favor pro-establishment narratives is comprehensive, and well worth reading in its entirety. This short Mintpress News article by Alan MacLeod on the way this same monopolistic editing dynamic has seen Mintpress, teleSur English, and Venezuela Analysis blacklisted from Wikipedia in the same way is also worth a look.

Wow. Twitter deleted 170,000 accounts for “spreading narratives favorable to the Communist Party of China”. To identify accounts, Twitter “worked with” @ASPI_org — a “think tank” funded by the US and Australian governments + numerous weapons manufacturers.https://amp.cnn.com/cnn/2020/06/11/tech/twitter-manipulation-account-removal/index.html …

Twitter deletes over 170,000 accounts, some of which tried to spin Covid-19 in China’s favor

Twitter announced Thursday that it had shut down more than 170,000 accounts tied to the Chinese government. Experts working with Twitter who reviewed the accounts said they pushed deceptive narrati…

899 people are talking about this

Facebook’s new double standard, a clear sign who calls the shots (US government). They added labels on Chinese and Russian funded media as “state-controlled” (which isn’t accurate) but no label on British & US funded media like BBC and Radio Free Europe. So fair. 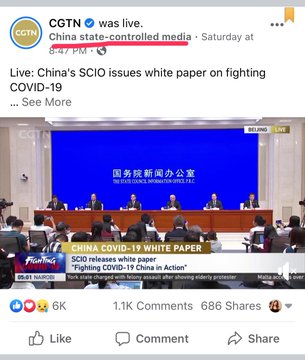 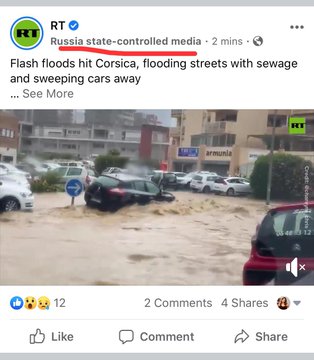 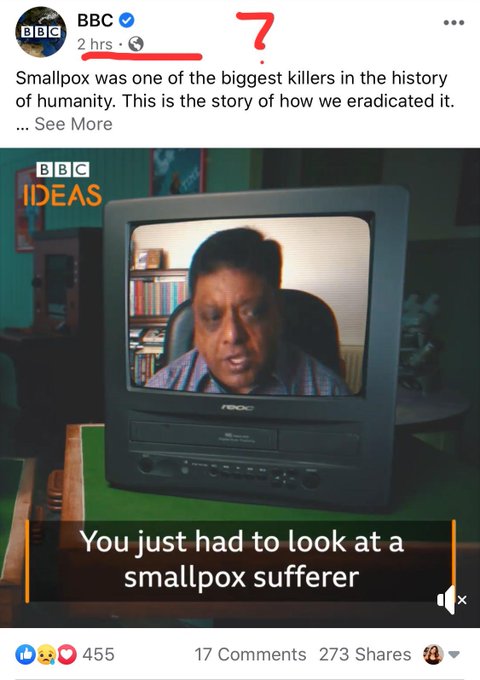 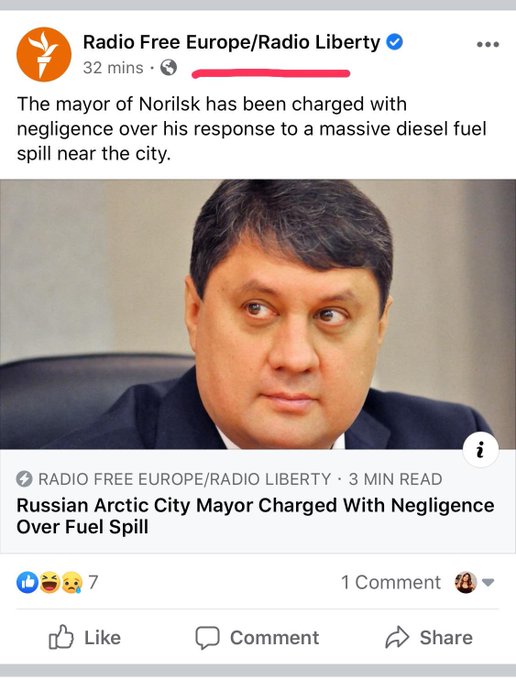 1,865 people are talking about this

This all comes out as we learn that Facebook is attaching warning labels to posts from outlets sponsored by governments which have not been absorbed into the US-centralized empire like RT and CGTN, but attaching no such label to outlets funded by imperial governments like BBC and Radio Free Europe. There is not any discernible difference in the degree of bias shown in state media from unabsorbed nations like Russia and China than there is in state media from the US and UK (or oligarchic media from the US and UK for that matter), but Facebook causes its 2.6 billion active users to look at one with suspicion but not the other.

This also comes out at the same time we learn that Twitter has deleted over 170,000 accounts for “spreading geopolitical narratives favorable to the Communist Party of China”. CNN reports (in an article which also cites the analysis of the scandal-ridden narrative manager Renee DiResta) that the accounts were determined to be “tied to the Chinese government” by “experts” who we learn later in the article are none other than the Australian Strategic Policy Institute (ASPI), a think tank geared explicitly toward fomenting anti-China sentiment in Australia.

“Former Australian Foreign Minister Bob Carr has slammed ASPI for pushing a ‘one-sided, pro-American view of the world’, while the former Australian ambassador to China Geoff Raby added that ASPI is ‘the architect of the China threat theory in Australia’,” journalist Ajit Singh noted on Twitter, adding, “Australian Senator Kim Carr has slammed ASPI for seeking to ‘promote a new cold war with China’ in collaboration with the US. In February, Carr highlighted that ASPI received $450,000 funding from the US State Department in 2019–20.”

This blatant imperialist narrative manipulation operation are the “experts” Twitter consulted in determining which accounts were “tied to the Chinese government” and therefore needed to be silenced. Twitter meanwhile continues to allow known fake accounts like the MEK propaganda operation “Heshmat Alavi” to continue inauthentically posing as real people, even when their propaganda is publicized by the President of the United States, because such accounts toe the imperialist line against empire-targeted governments. This pro-imperialism slant is standard for all Silicon Valley tech giants.

An Iranian Activist Wrote Dozens of Articles for Right-Wing Outlets. But Is He a Real Person?

36 people are talking about this

America’s foreign adversaries have flooded social media with content meant to show division and discord in the wake of George Floyd’s death, according to U.S. government intelligence bulletin obtained by @ABC News. https://abcn.ws/37sHpFi

America’s foreign adversaries have flooded social media with content meant to sow discord in the wake of George Floyd’s death, according to a U.S. intelligence report.

509 people are talking about this

This also comes out at the same time the mass media are warning us that Russia, China and Iran are “employing state media, proxy outlets, and social media accounts to amplify criticism of the United States related to the death of George Floyd and subsequent events.”

“As protesters hit the streets in cities across the country, America’s foreign adversaries have flooded social media with content meant to sow division and discord in the wake of George Floyd’s death, according to a U.S. government intelligence bulletin obtained by ABC News,” we are told by the Disney-owned ABC.

“These actors criticize the United States as hypocritical, corrupt, undemocratic, racist, guilty of human rights abuses and on the verge of collapsing,” the bulletin reads, which to anyone who’s been paying attention is obviously true. This is a news story about people from other countries saying true things about the United States of America.

“This is yet another indicator that Russia is using the combination of overt propaganda and covertly disseminated disinformation to sow discord across our populace, expand the cracks in our society, and undermine the credibility of the U.S. government,” former senior Department of Homeland Security official and current ABC News contributor John Cohen informs us.

Ahh, okay. Cool. Thank you for the information, former senior Department of Homeland Security official and current ABC News contributor John Cohen. Man it sure is a good thing America doesn’t have state media. Think about how bad the disinformation would be.

“Civil wars don’t start with gunshots, they start with words” social media companies will be first battlefield between Americans before spilling onto our streets. We must address #TechHearing #Senate https://www.fpri.org/article/2017/10/extremist-content-russian-disinformation-online-working-tech-find-solutions/ … 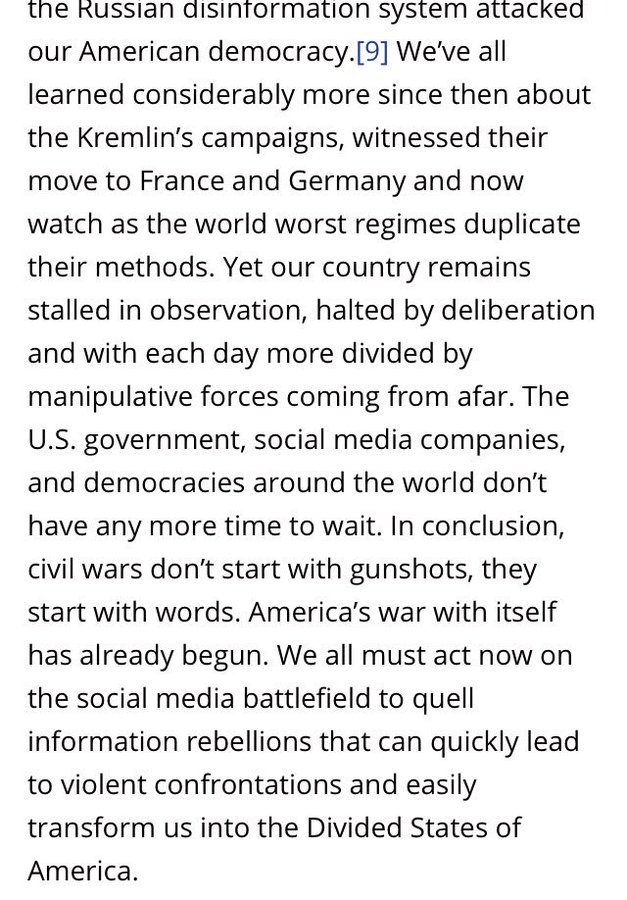 1,254 people are talking about this

Social media outlets were told that they need to censor their platforms to “prevent the fomenting of discord,” but obviously they didn’t move quickly enough, because the discord has been well and truly fomented. And now they are in a mad scramble to prevent Americans from hearing what people in foreign nations have to say about that, still apparently laboring under the delusion that this is anything other than homegrown, purebred, cornfed, American-as-apple-pie discord.

This is encouraging, because you can’t fix something you haven’t made conscious. This is true of our own unresolved psychological issues, and it’s true of our unresolved collective issues as well. The first step toward a healthy world is expanded consciousness.

This is why increasing government opacity, internet censorship, and the war on journalism are so dangerous. Corruption and abuse thrive in darkness, and corrupt abusers want to keep that darkness intact. They want to keep things as unconscious as possible.

It’s beginning to look like that cat’s out of the bag, though, and I would be very surprised if they ever manage to get that sucker back in there.

What an exciting time to be alive.