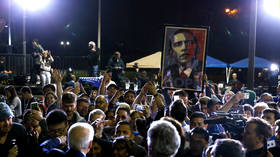 Joe Biden speaks at his Super Tuesday night rally in Los Angeles © Reuters / ELIZABETH
After a rough run and even some mainstream media criticism in therapeutic doses, Joe Biden won big on Super Tuesday. His former boss Barack Obama is rumored to be behind it – which speaks volumes about the nature of the race.

It has to be said that Joe Biden has had one heck of a Super Tuesday. He came from a questionable position to go on to win most states, including a major upset victory over Bernie Sanders in Texas. He also took Virginia, North Carolina, Minnesota, and even managed to upset both Elizabeth Warren and Sanders in Massachusetts (Warren’s home state).

It wasn’t too long ago that most of us were looking at Biden thinking “not even the corporate media can save this man’s political career.” Following recent reminders that Biden was a leading mastermind behind the criminal invasion of Iraq in 2003 and the fact that he can’t answer simple questions from prospective voters without losing his cool and telling them to vote for someone else (or even telling them to vote for Trump himself) it has been quite difficult to see him as a genuinely viable alternative to Trump.

ALSO ON RT.COMJoe Biden’s campaign goes from fire sale to on-fire, as Democrats prove they’re better at fighting their own than fighting Trump

Most surprising to me is Biden’s popularity with African American voters in places like Alabama, Arkansas, Oklahoma and Tennessee. This is the same Joe Biden that in regard to slavery, said he doesn’t “feel responsible for the sins of my father and grandfather” before suggesting that African Americans don’t know how to raise their children. This is also the same Biden widely credited with having a major role in the mass incarceration of African American people. He even referred to Barack Obama as “the first mainstream African-American who is articulate and bright and clean and a nice-looking guy.”

Jeez. Yet up until recently, Bernie Sanders struggled to maintain 12 percent of the black vote, with Biden miles ahead with 42 percent.

While Biden’s popularity with black voters remains a mystery to me, his recent Super Tuesday surge, enabled partially by the dropping out of the primary race of Pete Buttigieg and Amy Klobuchar, can be explained by something else.

According to NBC News, it is the “hidden hand” of former president Barack Obama which has helped Biden’s surging success. While Obama defied expectations and refrained from openly endorsing his former White House buddy Biden, he allegedly sent the “signal” that the ex-VP was his favorite in the run-up to Super Tuesday, and even called Buttigieg before the latter endorsed Biden. Biden’s win in Virginia makes sense in this context; given Barack Obama won this particular arena twice. From the evidence we have at hand, it also is apparent that the late voters have helped turn the tide in Biden’s favour. Perhaps seeing the recent support for Biden from the so-called “moderate Democrats” has helped kick these late voters into gear.

ALSO ON RT.COMApplause & groans after Biden adviser ‘tackles’ Super Tuesday protester (VIDEO)Obama’s support for Biden, whether hidden from sight or not, should tell us everything we need to know about Biden and everything we wished we could learn about Bernie Sanders. While the media appears to paint the fear of a Bernie Sanders campaign with a tarnish that suggests Sanders could never defeat Trump, the real issue is more that Sanders might actually defeat Trump, claim the presidency and enact some of the policies that might seriously gut the US billion-dollar war machine. 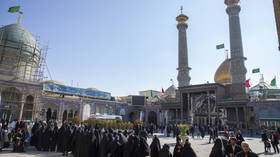 And while I am not going to pretend that once elected, Sanders would be able to keep to his promises (or that he even intends to), the fact is that Sanders certainly represents more of the “yes-we-can” movement of the Obama election campaign in the early 2000s than Biden does. Rallying on an anti-war platform with a greater focus on, for example, health care and education, rejecting Sanders for a racist war-hawk like Biden makes little sense when viewed with any lens other than what I refer to as the Obama delusion.

If Biden continues this upward movement, Democrats are likely to rally behind him and celebrate him as the savior to defeat Donald Trump. For the rest of us who live in the real world, there’s little to celebrate, given Biden’s deplorable history on foreign policy, war, race relations, or basic human needs such as healthcare.