This abomination has got to end 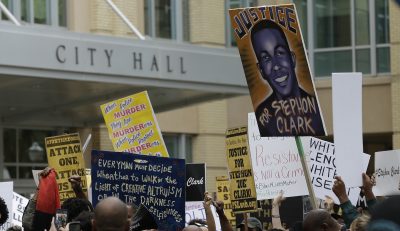 The entire system of policing in the United States is in crisis. Police murdering civilians has become a too common nightmare across the United States. The police murders of Michael Brown in Ferguson, MO, Eric Garner in New York City, Walter Scott in Charleston, SC, Tamar Rice in Cleveland OH, Freddie Gray in Baltimore, MD, Laquan McDonald in Chicago, IL and so many more have spurred a movement to transform policing.

The power relationship between police and the community is out of balance. Militarized policing of black and brown communities resembles an occupying force. While many police departments use the slogan “protect and serve,” in too many communities, people do not feel protected or served. They feel threatened, harassed and abused by police.

The relationship between police and the people needs to change. While there have been some positive reforms like police body cameras, special units to investigate police and increased prosecutions of police, these are insufficient. The most promising transformational change is to put in place community control of police through a democratically-elected police accountability board. 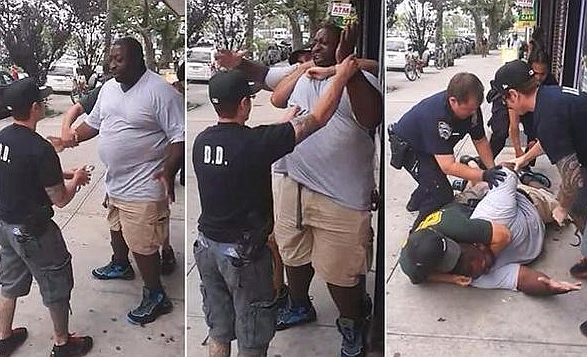 Screenshots showing the police conflict and killing of Eric Garner.

The constant police killings and shootings often caught on video and shared on social media have created a movement to transform policing. Associated Press described it, writing: “The videos — and the outrage that followed — helped ignite the most powerful civil rights movement since the 1960s.” The widespread police violence has become a national racial justice issue.

Police violence has been a reality in the United States from the start. The poster to the right could be carried today, but it is more than 50 years old. Dr. Martin Luther King, Jr., said in the I Have A Dream Speech, “We can never be satisfied as long as the Negro is the victim of the unspeakable horrors of police brutality.” Police violence has been part of centuries of oppression of Black people in the United States since they were first brought to the continent as slaves.

Slavery and racism are intertwined with policing, as Gary Potter Ph.D. wrote in The History of Policing in the United States:

“The genesis of the modern police organization in the South is the “Slave Patrol” (Platt 1982). The first formal slave patrol was created in the Carolina colonies in 1704 (Reichel 1992). Slave patrols had three primary functions: (1) to chase down, apprehend, and return to their owners, runaway slaves; (2) to provide a form of organized terror to deter slave revolts; and, (3) to maintain a form of discipline for slave-workers who were subject to summary justice, outside of the law, if they violated any plantation rules. Following the Civil War, these vigilante-style organizations evolved in modern Southern police departments primarily as a means of controlling freed slaves who were now laborers working in an agricultural caste system, and enforcing “Jim Crow” segregation laws, designed to deny freed slaves equal rights and access to the political system.”

The 1929 Illinois Crime Survey found that although blacks made up just five percent of the population, they constituted 30 percent of the victims of police killings. Police violence has been the spark for uprisings in black communities. Newark had one of the deadliest riots when in 1967 police officers beat a black cab driver leading to an insurrection where 26 people died over four days of unrest. The National Advisory Commission on Civil Disorders investigated the causes of major uprisings concluding: “police actions were ‘final’ incidents before the outbreak of violence in 12 of the 24 surveyed disorders.”

Why Are Police in the USA So Terrified? National Crisis: The Routine Killing of Innocent Civilians by the Police

The 1991 video of the bloody beating of cab driver Rodney King showed police brutality on television. Police hit King more than 50 times with their batons. When they were acquitted, the verdict led to an uprising that lasted six days, killing 63 people and injuring 2,373. The National Guard, US Army, and Marines were deployed in the community.

Today, the widespread acts of violence cannot be claimed to be isolated incidents of one bad apple. This violence is documented by the media like The Guardian and non-profit organizations like The Marshall Project. More than 1,100 people per year are killed by the police — more than four times the number of people lynched or executed by capital punishment in the worst of years —  about one person every eight hours.

Police departments have become a violent occupying force in communities of color and against people exercising their political rights at protests. Police departments with military-grade equipment have become the norm in US cities. Images of police officers in helmets and body armor riding through neighborhoods in tanks accompany stories of protests, including when people protest against police violence.

Putting People in Control of the Police

In 2012, about 100 people met in Chicago to develop a plan for community control of the police. Now, 60,000 people have signed petitions and there are 19 members of the Chicago City Council, 40 percent of the council, who support it. This weekend, 1,000 people attended the re-founding of the National Alliance Against Racist and Political Repression where the centerpiece of discussion was democratic control of the police.

We interviewed Frank Chapman, who has been involved in the work in Chicago to create a Civilian Police Accountability Council (CPAC) from the beginning, on our radio show.  Chapman puts the issue into context describing how for a brief period after the Civil War, communities controlled their police. But the reversal of Reconstruction ended that. He says that communities getting control of police should be recognized as central to black liberation.

Chapman explains how they have organized to build support for the issue with grassroots activism, holding community meetings, going door-to-door and tabling, gathering signatures and electing people to the city council.

The centerpiece of the Chicago bill is democratic community control. The bill for a Civilian Police Accountability Council gives broad powers to the elected council. These powers include complete control of the police:

When asked what the difference is between the elected council and the increasingly common Civilian Police Review Boards, Chapman responds: “Accountability.” By being democratically elected, the Chicago model holds the council and the police accountable. Review boards chosen by the government too often include people who are friends or allies of the police. 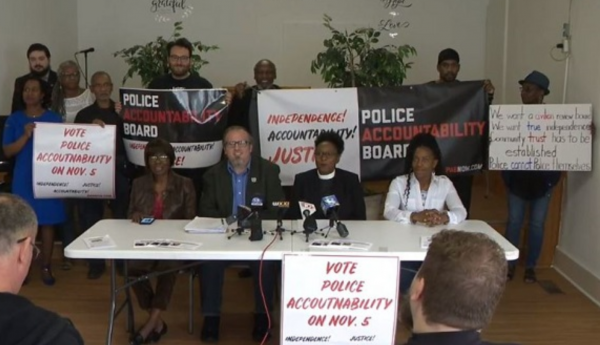 This November 4, the city of Rochester, NY passed a referendum creating a Police Accountability Board with 75 percent of voters supporting it. Between 2001 and 2016, citizens filed 923 allegations of excessive force. The Chief of Police sustained 16 of these allegations, only 13 led to discipline.

The board will be able to independently investigate civilian complaints, subpoena information for its investigations, and determine whether individual officers have committed misconduct. It will also create disciplinary guidelines, with an opportunity for input from the Chief of Police and the police union. If the board finds, after a hearing, that an officer has committed misconduct, the Chief of Police is required to impose discipline consistent with disciplinary guidelines. The board will also recommend changes to the Police Department’s policies, practices, and training. The police union is expected to file suit to stop this board from taking effect.

The board will be composed of nine unpaid Rochester residents: one appointed by the Mayor and eight appointed by the City Council; four of the Council’s appointees will be nominated by a coalition of community organizations, the Police Accountability Board Alliance. The potential Achilles Heel of this new law is the lack of democratic control by the people.

As a result of a November 2001 referendum supported by over 76 percent of the electorate, Miami created the Civilian Investigative Panel (“CIP”). Voters sought oversight because of a series of suspicious police shootings, throwdown guns and officers lying to grand juries. The CIP only makes recommendations to the police and has weak powers granted to its 13 members. They have lost their fight to be able to subpoena police officers due to the state’s Law Enforcement Bill of Rights. This approach has been judged as a failure. Sixteen states have a Law Enforcement Bill of Rights, which gives extra protection to police under investigation and makes it impossible for police to be judged by anyone but other police officers.

Lessons from the experience with police oversight include the importance of the democratic selection of oversight boards, not boards appointed by elected officials, clear powers that are not merely advisory for the board and, in states where relevant, confronting the Law Enforcement Bill of Rights.

Cities are spending large shares of their budgets on police at the expense of social services, health care, infrastructure, and other needs. Oakland spent 41 percent of the city’s general fund on policing in 2017. Chicago spent nearly 39 percent, Minneapolis, almost 36 percent, and Houston 35 percent. A recent study documents how a living wage, access to holistic health services and treatment, educational opportunity, and stable housing are far more successful in reducing crime than police or prisons.

Democratic community control of the police transforms the power dynamic between police and citizens. Black communities policing the police in their neighborhoods to confront the long term racist roots of policing in the United States. Community control of police needs to become the unified goal of movements seeking to end police violence, create police who serve the community and liberate black communities.