25 Times Trump Has Been Dangerously Hawkish On Russia — Caitlin Johnstone

CNN has published a fascinatingly manipulative and falsehood-laden article titled “25 times Trump was soft on Russia“, in which a lot of strained effort is poured into building the case that the US president is suspiciously loyal to the nation against which he has spent his administration escalating dangerous new cold war aggressions.

The items within the CNN article consist mostly of times in which Trump said some words or failed to say other words; “Trump has repeatedly praised Putin”, “Trump refused to say Putin is a killer”, “Trump denied that Russia interfered in 2016”, “Trump made light of Russian hacking”, etc.

CNN’s 25 items are made up almost entirely of narrative and words; Trump said a nice thing about Putin, Trump said offending things to NATO allies, Trump thought about visiting Putin in Russia, etc. In contrast, the 25 items which I am about to list do not consist of narrative at all, but rather the actual movement of actual concrete objects which can easily lead to an altercation from which there may be no re-emerging. These items show that when you ignore the words and narrative spin and look at what this administration has actually been doing, it’s clear to anyone with a shred of intellectual honesty that, far from being “soft” on Russia, Trump has actually been consistently reckless in the one area where a US president must absolutely always maintain a steady hand. And he’s been doing so with zero resistance from either party.

It would be understandable if you were unaware that Trump has been escalating tensions with Moscow more than any other president since the fall of the Berlin Wall; it’s a fact that neither of America’s two mainstream political factions care about, so it tends to get lost in the shuffle. Trump’s opposition is interested in painting him as a sycophantic Kremlin crony, and his supporters are interested in painting him as an antiwar hero of the people, but he is neither. Observe:

1. Implementing a Nuclear Posture Review with a more aggressive stance toward Russia 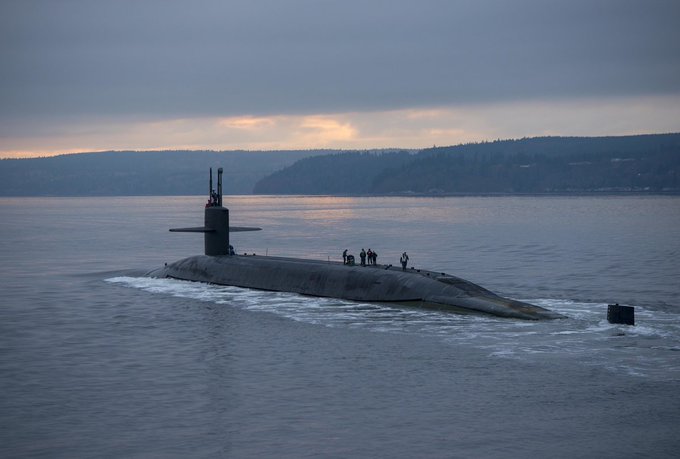 Last year Trump’s Department of Defense rolled out a Nuclear Posture Review which CNN itself called “its toughest line yet against Russia’s resurgent nuclear forces.”

“In its newly released Nuclear Posture Review, the Defense Department has focused much of its multibillion nuclear effort on an updated nuclear deterrence focused on Russia,” CNN reported last year.

This revision of nuclear policy includes the new implementation of so-called “low-yield” nuclear weapons, which, because they are designed to be more “usable” than conventional nuclear ordinances, have been called “the most dangerous weapon ever” by critics of this insane policy. These weapons, which can remove some of the inhibitions that mutually assured destruction would normally give military commanders, have already been rolled off the assembly line.

For years, neocons and arms industry darlings like @RepAdamSchiff have sought to re-arm Ukraine and escalate the conflict in Donbas. By stirring up Russiagate, they finally got their deadly deal. My latest: https://www.truthdig.com/articles/russiagate-helped-secure-dangerous-arms-deal/ …

Dec. 18 was a day like any other in the Donbas region, the flashpoint of a grinding civil war between the Ukrainian military and pro-Russian separatists. T

360 people are talking about this

Lost in the gibberish about Trump temporarily withholding military aide to supposedly pressure a Ukrainian government who was never even aware of being pressured is the fact that arming Ukraine against Russia is an entirely new policy that was introduced by the Trump administration in the first place. Even the Obama administration, which was plenty hawkish toward Russia in its own right, refused to implement this extremely provocative escalation against Moscow. It was not until Obama was replaced with the worst Putin puppet of all time Uthat this policy was put in place.

Another escalation Trump took against Russia which Obama wasn’t hawkish enough to also do was bombing the Syrian government, a longtime ally of Moscow. These airstrikes in April 2017 and April 2018 were perpetrated in retaliation for chemical weapons use allegations that there is no legitimate reason to trust at this point.

Russia accused the United States of promoting regime change in Venezuela, warning of the “catastrophic” consequences of destabilizing one of the Kremlin’s key South American allies https://nyti.ms/2DwUGiI

Russia Warns U.S. Not to Intervene in Venezuela as Military Backs Maduro

The declaration of loyalty to President Nicolás Maduro was a setback for the Venezuelan opposition leader, who has been backed by several countries, including the United States.

779 people are talking about this

Venezuela, another Russian ally, has been the subject of relentless coup attempts from the Trump administration which persist unsuccessfully to this very day. Trump’s attempts to topple the Venezuelan government have been so violent and aggressive that the starvation sanctions which he has implemented are believed to have killed tens of thousands of Venezuelan civilians.

Trump has reportedly spoken frequently of a US military invasion to oust Venezuelan president Nicolas Maduro, provoking a forceful rebuke from Moscow.

5. Withdrawing from the INF treaty

Russia’s Vladimir Putin has said America’s latest missile test has raised new threats and will warrant a response from Moscow.

The missile test on Sunday would have been banned under a now-defunct arms treaty. 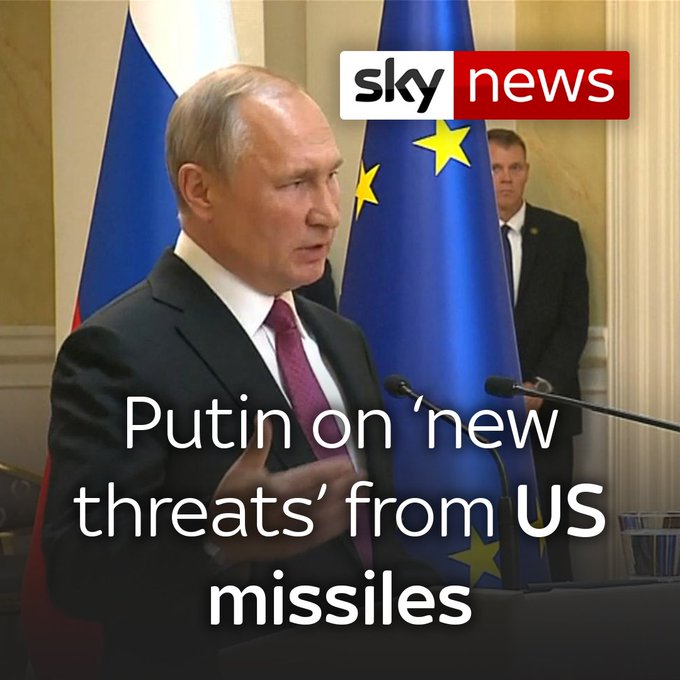 58 people are talking about this

For a president who’s “soft” on Russia, Trump has sure been eager to keep postures between the two nations extremely aggressive in nature. This administration has withdrawn from the 1987 Intermediate-Range Nuclear Forces Treaty, prompting UN Secretary General Antonio Guterres to declare that “the world lost an invaluable brake on nuclear war.” It appears entirely possible that Trump will continue to adhere to the John Bolton school of nuclear weapons treaties until they all lie in tatters, with the administration strongly criticizing the crucial New START Treaty which expires in early 2021.

“The Trump administration has taken steps toward leaving a nearly three-decade-old agreement designed to reduce the risk of war between Russia and the West by allowing both sides to conduct reconnaissance flights over one another’s territories,” The Wall Street Journal reported last month, adding that the administration has alleged that “Russia has interfered with American monitoring flights while using its missions to gather intelligence in the US.”

Again, if you subscribe to the bizarre belief that withdrawing from this treaty benefits Russia, please think harder. Or ask the Russians themselves how they feel about it:

“US plans to withdraw from the Open Skies Treaty lower the threshold for the use of nuclear weapons and multiply the risks for the whole world, Russian Security Council Secretary Nikolai Patrushev said,” Sputnik reports.

“All this negatively affects the predictability of the military-strategic situation and lowers the threshold for the use of nuclear weapons, which drastically increases the risks for the whole humanity,” Patrushev said.

“In general, it is becoming apparent that Washington intends to use its technological leadership in order to maintain strategic dominance in the information space by actually pursuing a policy of imposing its conditions on states that are lagging behind in digital development,” he added.

11. War ships in the Black Sea

The US Navy is ramping up its presence in the Black Sea as part of a bid to counter Russia’s increased presence there, a US military official tells CNN http://cnn.it/2GrOQ0G 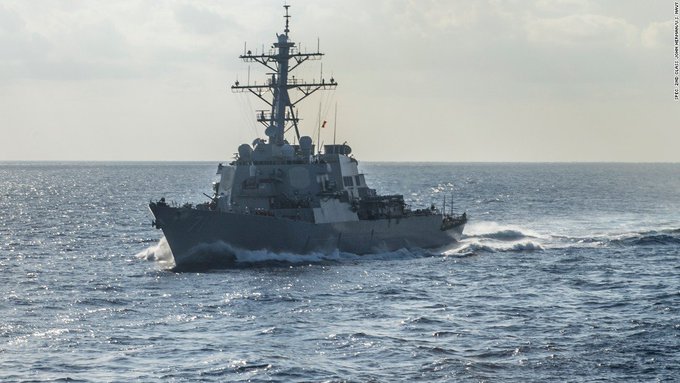 117 people are talking about this

US President Donald Trump approved fresh sanctions on Russia Wednesday after Congress showed overwhelming bipartisan support for the new measures,” CNN reported at the time. “Congress passed the bill last week in response to Russia’s interference in the 2016 US election, as well as its human rights violations, annexation of Crimea and military operations in eastern Ukraine. The bill’s passage drew ire from Moscow — which responded by stripping 755 staff members and two properties from US missions in the country — all but crushing any hope for the reset in US-Russian relations that Trump and Russian President Vladimir Putin had called for.”

Both RT and Sputnik have been forced to register as “foreign agents” by the Trump administration. This classification forced the outlets to post a disclaimer on content, to report their activities and funding sources to the Department of Justice twice a year, and could arguably place an unrealistic burden on all their social media activities as it submits to DOJ micromanagement.

“Isn’t it weird how when you ignore the narratives being promoted by both sides and just look at the raw behavior, being a ‘Putin puppet’ looks exactly the same as being a dangerously aggressive Russia hawk?”#Russia #diplomatshttps://steemit.com/russia/@caitlinjohnstone/worst-putin-puppet-ever …

In what the BBC is unironically referring to as “a remarkable show of solidarity,” the US and more than 20 other… by caitlinjohnstone

148 people are talking about this

24. Withdrawing from the Iran deal

Russia has been consistently opposed to Trump’s destruction of the JCPOA. In a statement after Trump killed the deal, the Russian Foreign Ministry said it was “deeply disappointed by the decision of US President Donald Trump to unilaterally refuse to carry out commitments under the Joint Comprehensive Plan of Action”, adding that this administration’s actions were “trampling on the norms of international law”.

The only reason anyone still believes Trump is anything other than insanely hawkish toward Russia is because it doesn’t benefit anyone’s partisanship or profit margins to call it like it really is. The facts are right here as plain as can be, but there’s a difference between facts and narrative. If they wanted to, the political/media class could very easily use the facts I just laid out to weave the narrative that this president is imperiling us all with dangerous new cold war provocations, but that’s how different narrative is from fact; there’s almost no connection. Instead they use a light sprinkling of fact to weave a narrative that has very little to do with reality. And meanwhile the insane escalations continue.

In a cold war, it only takes one miscommunication or one defective piece of equipment to set off a chain of events that can obliterate all life on earth. The more things escalate, the greater the probability of that happening. We’re rolling the dice on armageddon every single day, and with every escalation the number we need to beat gets a bit harder.

We should not be rolling the dice on this. This is very, very wrong, and the US and Russia should stop and establish detente immediately. The fact that outlets like CNN would rather diddle made-up Russiagate narratives than point to this obvious fact with truthful reporting is in and of itself sufficient to discredit them all forever.

← Expose: US Concentration Camps in Post-War Germany — The Most Revolutionary Act
Impeach the Government: Rogue Agencies Have Been Abusing Their Powers for Decades — Global Research →