Barbara Sampson ‘carried out the alleged autopsy on Jeffrey Epstein’.

Rotana Farea, 22, and her sister Tala, 16, were found beside the Hudson River in late October 2018, tied together at the ankles and waist by duct tape.

Sampson’s Medical Examiner’s Office had the corpse of Leah Lehrer rotting in a cooler in its morgue for nearly a year.

It now believes that another body was mistakenly sent for cremation in Leah Lehrer’s place, insiders told The Post.

Officials think the ashes turned over to Lehrer’s heirs were likely those of Rebecca Alper, ‘whose missing body has dumbfounded the problem-plagued agency‘.

Sampson’s Medical Examiner’s Office ‘has struggled with a string of bodies wrongly sent to crematoriums, medical classes and embalming schools.’

An inmate who spent months in Epstein’s prison block says there is ‘no way he could have killed himself.

“The inmate said the bed sheets are paper and the ceilings are ‘eight or nine feet’ high with nothing to attach to.

‘And there’s a cop at the door about every nine minutes, whether you’re on suicide watch or not.’

“Suicide? Really? Having worked in prison on Psych Staff for 11+ yrs, something about this smells funny. Suicide w/ such a high profile inmate?

“The security measures would have already been extraordinary. Anything is possible, but this is highly unlikely.”

The New York prison which allegedly held Epstein was under the watch of Attorney General William Barr, who was chosen to head the Justice Department by Donald Trump.

Barr and Trump are reported to be associates of Epstein. 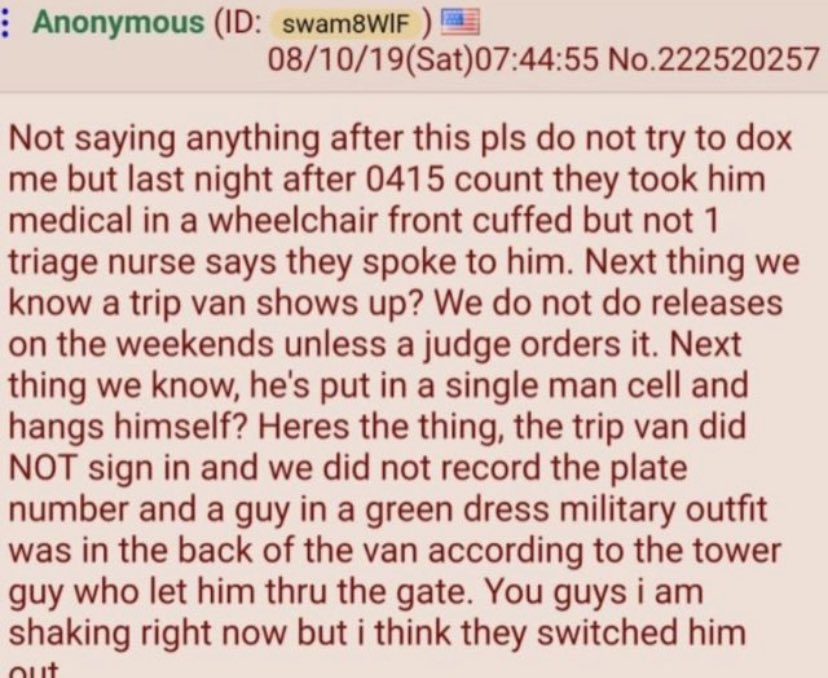 CIA and Mossad at work?