Democrat presidential candidate Kamala Harris is descended from Irish slave owner Hamilton Brown, the namesake of Brown’s Town in Jamaica, who recruited massive numbers of Irish migrants to Jamaica to work on his sugar plantations after the British empire abolished slavery.

Kamala Harris’ father Donald Harris wrote an essay entitled “Reflections of a Jamaican Father” for Jamaica Global Online, in which he made a startling admission (emphasis added):

“My roots go back, within my lifetime, to my paternal grandmother Miss Chrishy (née Christiana Brown, descendant of Hamilton Brown who is on record as plantation and slave owner and founder of Brown’s Town) and to my maternal grandmother Miss Iris (née Iris Finegan, farmer and educator, from Aenon Town and Inverness, ancestry unknown to me).  The Harris name comes from my paternal grandfather Joseph Alexander Harris, land-owner and agricultural ‘produce’ exporter (mostly pimento or all-spice), who died in 1939 one year after I was born and is buried in the church yard of the magnificent Anglican Church which Hamilton Brown built in Brown’s Town (and where, as a child, I learned the catechism, was baptized and confirmed, and served as an acolyte).”

Hamilton Brown was not only a slave owner, but also an engineer of mass Irish migration to Jamaica after the British empire abolished slavery in 1834.

Jamaican Family Search recorded: “Hamilton Brown owned several plantations over the years 1817 to about 1845. According to the 1818 Almanac which can be found on this site, (Jamaican Family Search) , he was the owner of Minard (128 slaves) which he must have acquired from its previous owner (John Bailie) in 1815 or later. The number of slaves on this estate approximates the number of slaves in one of the registers attributed to his ownership (124 slaves). The other register (86 slaves) cannot be assigned to any estate, although he is listed in Almanacs for subsequent years as owning several, (Antrim, Grier Park, Colliston, Little River, Retirement and Unity Valley).”

Here is a full accounting of the slaves owned by Hamilton Brown, according to the National Archives in London, as of June 28, 1817 in the parish of St. Ann in Jamaica:

Hamilton Brown officially swore to the authenticity of this record, stating:

“I Hamilton Brown do swear that the above list and return consisting of two sheets is a true perfect and complete list and return, to the best of my knowledge and belief in every particular therein mentioned of all and every slaves possessed by me as owner, considered as most permanently settled, worked and employed in the Parish of Saint Ann on the twenty Eight day of June One thousand Eight Hundred and Seventeen without fraud, deceit or evasion So help me God.

Sworn before me this twenty fourth day of September 1817”

Hamilton Brown’s slave owning shows up in other records, as well.

“Hamilton Brown was instrumental in the importing of several hundred labourers and their families from Ireland to Jamaica between 1835 and 1840,” according to University College London’s project “Legacies of British Slave-ownership.” The project describes Hamilton Brown as a “Major attorney and resident slave-owner in Jamaica.”

The Jamaican newspaper The Gleaner reported in July 2012 in a travel piece on Brown’s Town:

“As we struggled to stay on the narrow sidewalk, we noticed an elderly man coming our way. He had an unruly grey beard and wore spectacles with thick frames and cloudy lenses.

“Hallo! Hallo!” he said. We stopped and returned the greeting. The man gave his name as Ferly and he told us a bit about Brown’s Town.

“A good amount of Brown live here, you know,” he said. “People what name Brown pack up the place. It all coming from Hamilton Brown who the town name after. Yes man, dem teach it in school,” said Ferly, nodding.

He told us that Hamilton Brown was buried in the graveyard at the nearby Anglican Church. “But a lot of people don’t even know that. Is only long-time people like me know dem tings,” he said.”

1. The media kept referring to Kamala Harris as “African American” because her mother was Indian and her father was “Jamaican”. Kamala has NEVER referred to herself as Black, and there are actually families in Jamaica who don’t refer to themselves as “Black”. This is Kamala’s dad 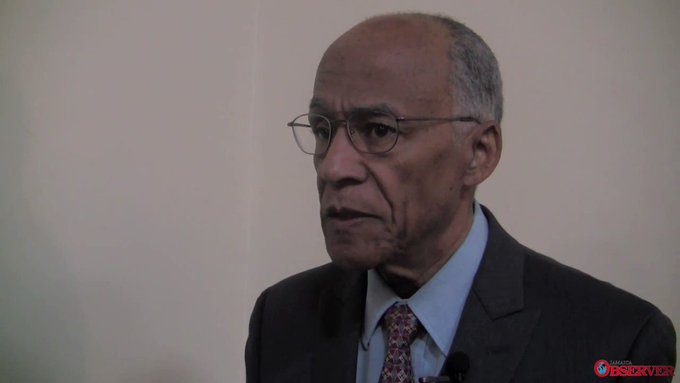 2. Donald J. Harris is “Jamaican” but I have not found any evidence that he has referred to himself as “Black”. I have found that he and Kamala do acknowledge that they are direct blood descendants of an infamous white SLAVE OWNER in Jamaica named Hamilton Brown.