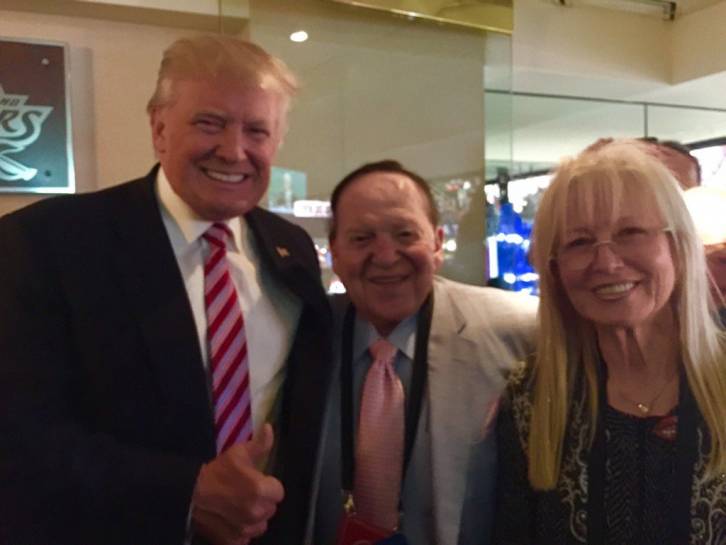 Yesterday Nancy Pelosi asked a very pointed question on CNN, Why is Trump threatening a war with Iran?

[W]hat is his motivation? What is their motivation to be provocative with the Iranians? Why did the president turn his back on the Iranian nuclear agreement? What’s the logic except some other issue — that it was negotiated by President Obama? We had so many national security experts, whether they were ambassadors, generals, admirals and all the rest supporting the agreement as well, so it had official, diplomatic, national security, technical, nuclear, et cetera support along the way. So why?

So, then he comes in and does — undoes that and inflames the U.S.-Iran issue. Why? What is the purpose?… I think he probably knows there’s no appetite for war among the American people.

There seems to me a very obvious answer to this question. Sheldon and Miriam Adelson. Adelson called on the last president, Barack Obama, to nuke Iran in 2013 rather than negotiate with Iran, and Obama ignored the advice. But Trump can’t ignore Adelson. Adelson and his wife Miriam gave $177 million to Donald Trump’s campaign and Republican causes in 2016-2018, making them his biggest donors by far; and Trump surely regards Adelson as his best hope for securing a second term, and for keeping him out of jail, too…

Today others surely have other answers to Pelosi’s question than Adelson. But the pity is that the Israel influence factor can’t be discussed and debated.

Adelson ought to be on the front pages now. Politicians should be calling out the Adelsons’ influence the same way Elizabeth Warren campaigns against the Koch Brothers. They ought to be mocking the fact that Trump gave Miriam Adelson the Presidential Medal of Freedom right alongside Babe Ruth and Elvis. They should point out that National Security Adviser John Bolton is yet another gift to the Trump administration from Adelson. They ought to note that Adelson wished he fought in an Israeli uniform not an American one. They ought to say that Sheldon Adelson tried to kill the peace process under George W. Bush and Bush said he couldn’t do what Netanyahu wanted, telling Adelson, “I can’t be more Catholic than the Pope.” Trump doesn’t feel that prohibition.

The media should point out the connections between Adelson and Netanyahu– whom Trump has all but campaigned for. They should point out that Netanyahu’s political coalition came apart in 2015 over favors he was trying to do to Adelson’s newspaper, leading to a new election. At least the Israelis can talk about it! But here Trump is bending over backwards the same way, and the Adelsons aren’t on the front page.

Years ago Trump lambasted an opponent for the Republican nomination — “Sheldon Adelson is looking to give big dollars to Rubio because he feels he can mold him into his perfect little puppet. I agree!” Those words were prophetic. Too bad the media don’t seem to care.

← The Civil War Now in America — The Vineyard of the Saker
“Rise and Kill First.” – The Secret Israeli Worldwide Assassination Program. — Global Research →