This piece first appeared on RobertReich.org. Donald Trump, Fox News and Republicans in Congress label proposals they disagree with “fringe,” “radical” or “socialist.” Well, let’s see where the American people actually stand: On the economy, 76 percent of Americans favor higher taxes on the super-rich, including over half of registered Republicans. Over 60 percent favor […] 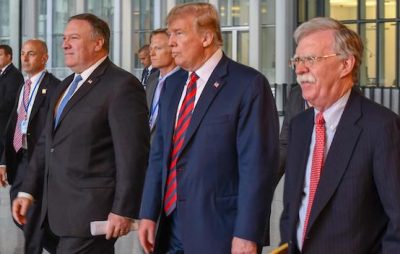 Be Thankful for Trump’s Iran Indecision… For Now — Global Research

Kurt Nimmo We can for now be thankful Trump didn’t kill people and blow things up in Iran yesterday [June 20]. Even so, the fact he went full-throttle, and then backed off is worrisome. It’s been obvious for some time now the president is in the middle of a tug of war between those who […]

QOTD: Trump seems to have seen the writing on the wall

(mənē mənē təqēl ūp̄arsīn, “numbered, numbered, weighed, and they are divided”) (Daniel 5:25) “While unable to live up to his electoral promises, Trump seems to be aware that the path laid out for him in the event of an attack on Iran would lead to his political destruction and probably to a conflict that is […]

The psycholigarchs want war with Iran

Trump Has a $259 Million Reason to Bomb Iran — Global Research On Thursday, the United States came perilously close to a military confrontation with Iran after it downed a U.S. drone that may or may not have entered the country’s air space. President Donald Trump reportedly ordered a retaliatory military strike … […] Much […]