SES SERCO “WET-WARE” SOFT KILL PLAN IS HAPPENING, BUT CAN BE STOPPED: DEFUND THEM, NOW!

(MAY 16, 2018)—On Jan. 02, 2018, a British Crown-controlled company named Serco Inc. was awarded a $610 million contract to manage FEMA Region 9 that covers Arizona, California, Nevada, Hawaii and the Pacific Islands. On Jul. 16, 2013, Obama awarded Serco a $1.2 billion contract to run the Obamacare website. Serco also manages the air traffic control towers in 63 U.S. airports, and has been paid more than $95 million to run the U.S. Patent and Trademark examination processes. Seesubstantiating evidence below.WHO IS SERCO?

Why have we not heard of them? More to the point, why are we outsourcing critical American infrastructure, ingenuity and private medical information on every U.S. citizen to sworn agents of the British Crown?!

Serco’s most recent 2016 annual report published at Companies House in London provides critical clues about Serco’s unstated mission. In looking at Serco’s bizarre collection of subsidiaries, one is left with the evident conclusion that something nefarious is afoot.

ON THE SURFACE, SERCO IS THE WEIRDEST ASSORTMENT OF COMPANIES ON THE PLANET

This Serco list of 73 subsidiaries revealed a shocking correlation among; (1) Serco’s business interests, (2) the activities of the Senior Executive Service (SES), and (3) the monstrous “Internet of Things” patents filed by Richard C. Walker, Hewlett-Packard and Agilent Technologies.

EUREKA! SERCO IS TASKED BY THE SES TO MANAGE THE GLOBAL EXECUTION OF THE “WET-WARE” INTERNET OF THINGS 5G SATELLITE SYSTEM FOR THE DEEP STATE

In the Walker patents, human beings or people are labeled as mere “wet-ware.” “Wet works” is a spy euphemism for assassination. Tellingly, Obama’s chief of staff, John D. Podesta, used the term just days before Justice Antonin Scalia was found dead in Texas, after which Obama immediately began promoting SES gloabalist Merrick B. Garland to replace him at the Supreme Court.

The association of the spy tradecraft “wet” words is apparent. Walker does not even hide it, he states that his patents are intended to track and control everything and ever body in this world, even ino low orbit—The Internet of Things. It is apparent that neither Walker nor his SES handlers ever expected deplorables to read his work. We have.

The widely-promoted 5G wireless plan is very clearly designed to make Walker’s one-world government population control plan a reality. Elon Musk (SpaceX), Eric Schmidt (Google), OneWeb (Qualcomm, Amazon) have been working with the SES-controlled The Aerospace Corporation to put up a hundred satellites so far, with a planned 24,000 more in the 5G plan. 5G will enable the SES to eliminate people without harming plants and animals, so they think.

They’re wrong. Why do you think honey bee populations are collapsing? ANSWER: Electromagnetic smog. Something like eight billion different radio frequencies surround us at all times. Can you mitigate these harmful frequencies? Yes, but we digress.

Globalist eugenicist Ted Turner, CNN founder(now known as the C.I.A. News Network) was caught here on video calling for a 75% reduction in the world population (“I think 2 billion is about right right.“). According to the U.N. Agenda 21, the goal is to reduce populations in high tech rare earth mineral rich poor countries (many in Africa), and to reduce populations in the consuming nations to make more room for the genetically superior elites who will remain. (And we thought the world turned its back on such evil thinking after Adolf Hitler and WWII. No, we secretly importedthose depraved Nazi eugenicists into the C.I.A. and IBM during operation Paperclip.)

It is no longer a secret that New World Order globalists are proponents of eugenics and world depopulation, as was Woodrow Wilson, Adolf Hitler and as are Hillary Clinton, Barack Obama and Planned Parenthood. Indeed, government data aggregator Deagel.com, Agenda 21 and Ted Turner’s Georgia Guidestonespredict higher than 70% population reduction by 2025-30. It appears that Serco is being paid billions of dollars a year to get ready and make it happen.

As you can see, in the video below, eugenics has been promoted by self-styled “elites” for a very long time.

A modern history of the eugenics depopulation agenda.

Edwin Black. (Feb. 05, 2004). Hitler’s debt to America. The Guardian. (“The Nazis’ extermination programme was carried out in the name of eugenics – but they were by no means the only advocates of racial purification.”). SeeEdwin Black video: IBM sold Nazis Holocaust infrastructure, supplies & staff – even at the death camps.

Eugenicists want to dramatically reduce the world’s population—by stealth if necessary. Wars have always been good for population reduction. Bankers get a two-fer when they fund war. They make money and they depopulate. In Secretary of State Madeleine Albright’s world, 500,000 dead Iraq children was acceptable collateral damage. Poisons, toxins and altered genetics work too. For example, billionaire eugenics promoter Bill Gates recently suggested that medical treatment be withheld from the elderly and the savings given to education. With Gates its all in the family. In 2003, he told interviewer Bill Moyers that his father was the former head of Planned Parenthood. Gate’s mother also worked at IBM—another eugenics promoter who supported Hitler’s eugenics campaign of murder throughout WWII.

SERCO IS DIRECTED BY THE SES

Ever since Americans for Innovation (AFI) and American Intelligence Media (AIM) unearthed the Senior Executive Service (SES), the revelations of their nefarious activities have been pouring in.

SeeObama hired them. Trump cannot fire them. So they say(over 500,000 views). Seealso The shadow government uses SES, Serco and OPIC as portals into horrific corruption.

Among these SES corruptocrats is perhaps the largest British company in America that you have never heard of—Serco Group Plc. (“Serco”).

SERCO HAS BEEN HANDED HUGE SWATHS OF U.S. SECURITY INFRASTRUCTURE

In addition, already mentioned, but bears repeating, Serco manages air traffic control at 63 U.S. airports! You cannot make this up. Outrageous? Most certainly.

Obvious questions are: “What is going on? (a) Why isn’t Serco a household name in America? (b) Why are we outsourcing critical American infrastructure and ingenuity to the British Crown? (c) Why are our three branches of government and the media silentabout this evident coup d’ etatof American sovereignty?

This British hegemony extends to the American judiciary and government.

British Crown Agentsoperate in America and have numerous U.S. government contracts too. Here is one example, a $23.7 million USAID contract with Serco. These are the very same Crown Agents whose taxes on tea sparked the Boston Tea Party.  SeeCrown Agents Act of 1995. Why are we giving any money and contracts at all to the British Crown?

In addition, both British and American attorneys are given the title of “Esquire” despite the fact that Article I, Section 9, Clause 8 of the U.S. Constitution prohibits the federal government from granting titles of nobility due to the corrupting foreign influences.

The fact is, American lawyers, judges, law professors and students are organized into an elaborate British-styled union called The American Inns of Court with over 30,000 members. It is directly modeled on the British Inns of Court comprised of four “Temples” in and around the City of London and Westminster.

Tellingly, our American Inns of Court nowhere mention the U.S. Constitution in their charter documents, including their Vision Statementand Professional Creed. To whom do they pledge? To “the movement” and a generic “Rule of Law.”

When one considers that The City of London UK banking center is adjacent to the British Inns of Courttemples, one begins to get the picture. The British Army may have withdrawn in 1776, but Britain’s bankers and lawyers dug in, and have never left. Now, a British company name Serco is being tapped by the SES to finish the job of bringing the American colonies to heel.

The following slides summarize our findings and conclusion that Serco was selected by Deep State shadow government globalists to manage the implementation of the SES soft kill of our population.

Fig. 8—U.S. Patent No. 6,965,816, re. Fig. 40 (“World Organization”). Incorporated by reference in multiple Walker applications, including U.S. Pat. App. No. 10/401,041, Fig. 2B, Automated Accounting System That Values Controls Records and Bills The Uses of Equipment Vehicles For Society. Seealso Meet The Person Who Can Remotely Crash Planes And Can Your Mind. 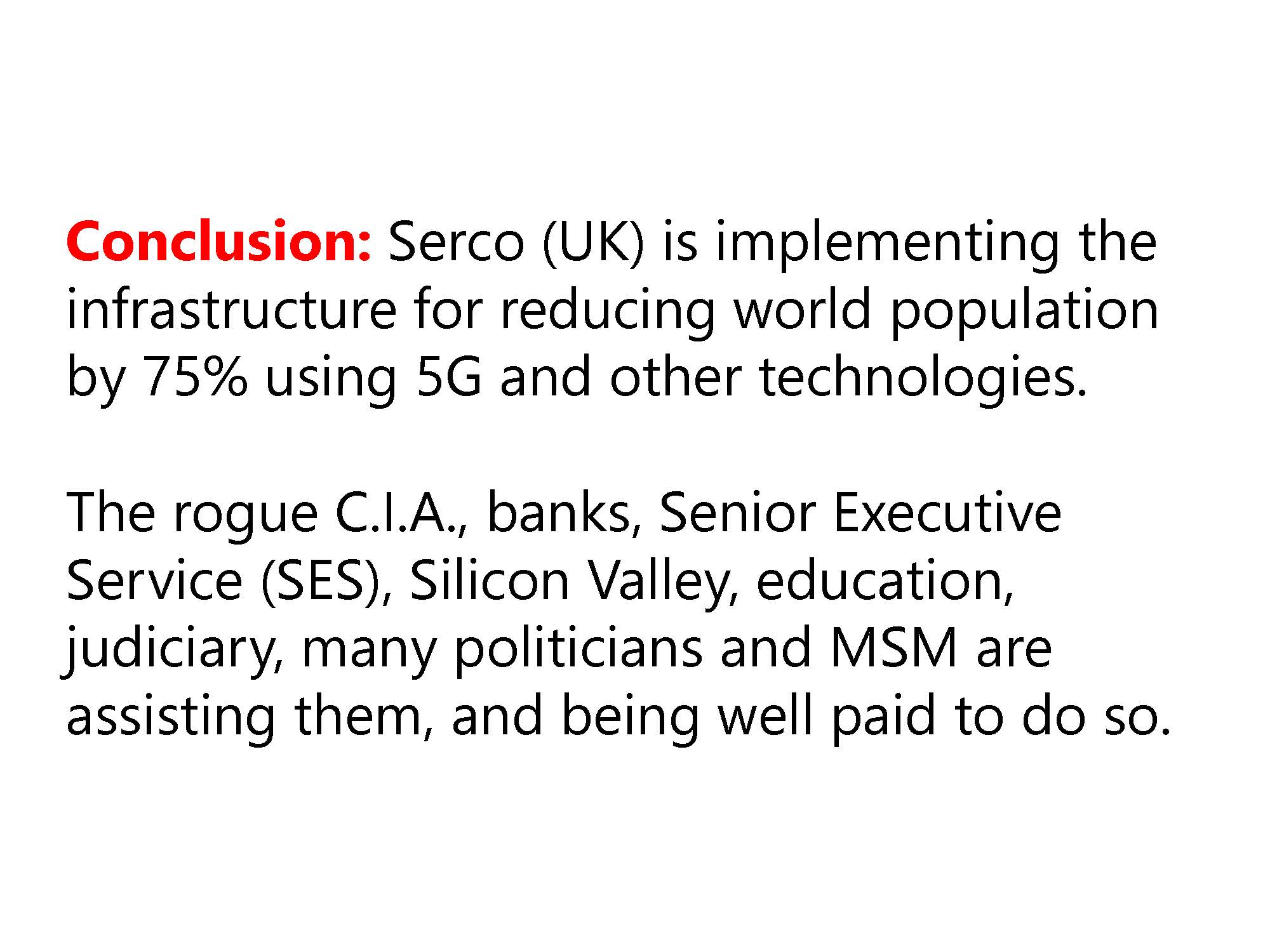 Fig. 10—Conclusion: Serco is implementing the infrastructure that could be used to reduce the world population by 75% if Ted Turner and U.N. Agenda 21 have their way. Do you want to be one of the 75%.

God-fearing citizens of the United States and the world must call upon President Trump and loyal American leaders to defund the feeder systems used by these SES corruptocrats.

Ask President Trump to write the check to Leader Technologies for their Miller Act Notice so they can help implement new technologies that respect Constitutional privacy and property and help implement a truly Free Press.

Mr. President, please pull the plug on these corruptocrats and their illegal funding streams. Since they are all based on fake values, no real services will be affected.

In addition, Leader shareholders have proposed a win-win solution to the collapse of the American Free Press, as well a large new revenue source without raising taxes. Leader principals are willing to funnel these payments back into establishing a truly Free Press. See Leader proposes trillion dollar fed revenue while lowering taxes.

Leader’s late 1990’s breakthrough in digital scalability gave these corruptocrats a platform to unify their communications globally—on a large scale not previously possible with IBM and Microsoft platforms. Leader’s founder Michael McKibben knew that because he had previously rebuilt AT&T’s email system AT&T AccessPlus 3.0. He knew exactly what IBM’s and Microsoft’s collaboration shortcomings were because AT&T Bell Labs engineers had told him after they had abandoned their failed alliance with IBM-Lotus called “Network Notes.” He knew they could not scale to the transaction volumes needed for the emerging Internet.  Problem-solver McKibben very intentionally set out to create a whole new paradigm. See The Weaponization of Social Media Should Concern Us All.

Once they had their “ah hah” moment in Dec. 1999, McKibben sought legal advice to protect the invention. He was eventually referred to the federal government’s top intellectual property lawyer, James P. Chandler, III. Little did McKibben know that Chandler was chief among the world’s corruptocrats. Chandler, who was already conspiring with the C.I.A., NSA, IBM, Microsoft, Cisco and Silicon Valley, knew that Leader’s invention would finally enable them to implement their dream to spy on everyone.

As wolves in sheep’s clothing, they offered the “social” services and email free of charge, replete with slippery legalese that gave them rights to all user data forever. This power has utterly corrupted them. Property and privacy were abolished in their pursuit of the seven deadly sins… in the name of “national security,” of course.

What they did not plan on was that Leader’s invention could not be controlled so precisely. Social users figured out ways to beat their censors and spread the truth using the very tools with which they are trying to enslave us.