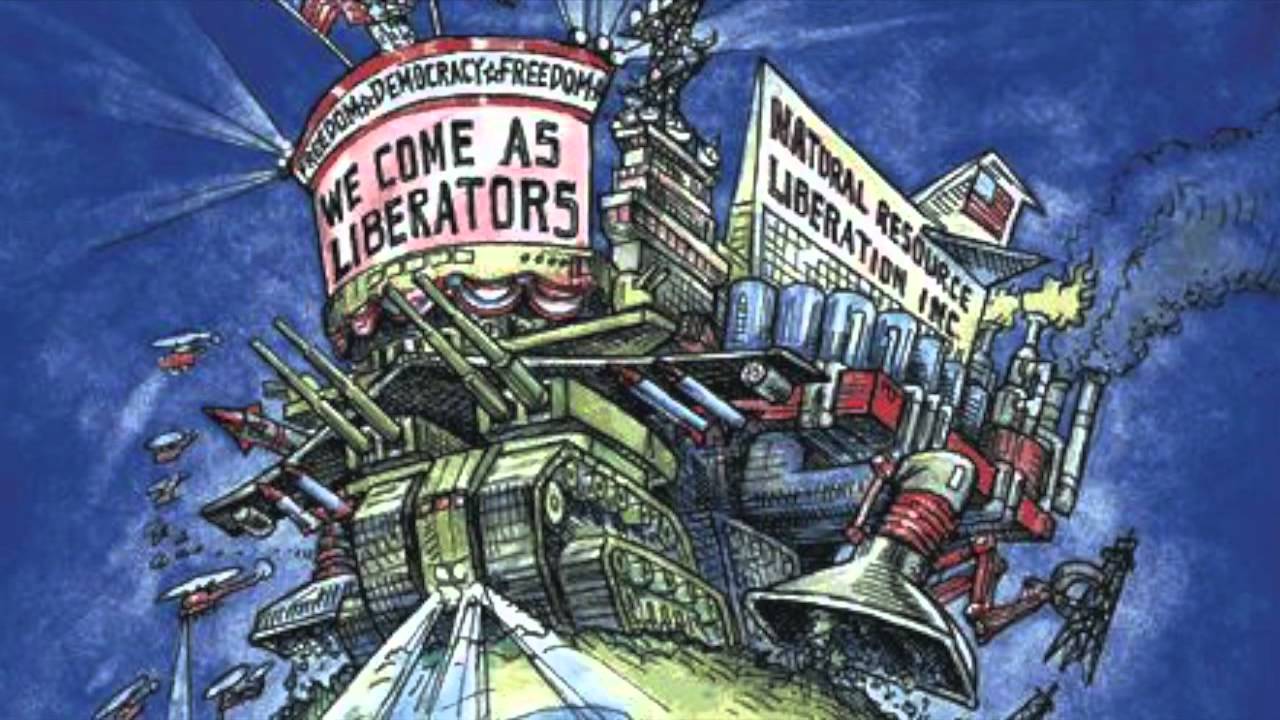 There is no mystery to the ideological collapse of U.S. ruling class politics under late stage capitalism and imperial decline. Simply put, the corporate duopoly parties have nothing to offer the masses of people except unrelenting austerity at home and endless wars abroad. A shrunken and privatized Detroit serves as the model for U.S. urban policy; Libya and Syria are the scorched-earth footprints of a demented and dying empire. The lengthening shadow of economic eclipse by the East leaves the U.S. Lords of Capital with no cards left to play but the threat of Armageddon.

As China reclaims its historic place at the center of the earth, alongside the huge and heavily armed landmass of Russia, Washington flails about in a frenzy of firewall-building, buying time with the blood of millions, hoping to somehow preserve its doomed hegemony. But the “exceptional” superpower has no Marshall Plan to rescue itself from the throes of systemic decay, and all that it can offer to the emerging nations of the world is a bad example and the threat of annihilation. Its own people tire of the “Great Game,” finally realizing that they are the ones who have been played.

George Bush drawled the “last hurrah” of empire with his declaration of “Mission Accomplished,” 15 years ago — and was quickly contradicted. With the failure in Iraq, the pretense of “spreading democracy” came ingloriously undone. A refurbishing of the imperial brand was attempted, with a bright and shiny new face – a Black-ish one — plus a new logo to justify invasion and regime-change: “humanitarian” intervention. But Obama’s assault on Syria revealed that the U.S. and its junior partners could only project power in the region through an alliance with Islamic jihadist terror. The architects of the War on Terror were, in fact, the godfathers of al Qaida.

“Do you realize now what you’ve done?” Vladimir Putin demanded of the Americans, at the United Nations, in 2015. “It is hypocritical and irresponsible to make loud declarations about the threat of international terrorism while turning a blind eye to the channels of financing and supporting terrorists, including the process of trafficking and illicit trade in oil and arms. It would be equally irresponsible to try to manipulate extremist groups and place them at one’s service in order to achieve one’s own political goals in the hope of later dealing with them or, in other words, liquidating them.”

Washington’s jihadist strategy has rapidly unraveled ever since. The empire was unmasked in the world’s most public forum, revealing the utter depravity of U.S. policy and, more importantly, the weakness of Washington’s position in the region. The mighty fortress of global capital, the self-appointed defender of the world economic “order,” was revealed as, not just in collusion with head-chopping, women-enslaving, sectarian mass-murdering terrorists, but militarily dependent on the very forces it claims to wage a twilight, “generational” battle to destroy. The U.S. has been spouting The Mother of All Lies, and most of humanity knows it. Deep down, most Americans suspect as much, too.

With its intervention in Syria as a stalwart foe of jihadism and in defense of the principle of national sovereignty, Russia spoke the language of international law and morality, presenting a fundamental challenge to U.S. imperial exceptionalism. By deploying his forces against Washington’s jihadist proxies, in a region infested with American bases, Putin put muscle behind his call for a “multi-polar” world order.

China understands clearly that the ultimate U.S. aim is to block China’s access to the region’s energy and markets, at will. Beijing has praised Russia’s military role in the war, and stood with Moscow in vetoing western Security Council resolutions targeting Damascus. China routinely joins with Russia – and most other nations on the planet — in pursuit of a more “multi-polar world.”

The U.S. now uses the desperate Kurdish militia as surrogates in Syria, in an attempt to justify its presence in the country, while continuing to arm, finance and train other “rebel” groups, reportedly including former ISIS fighters. The U.S. has always avoided targeting the al Qaida affiliate in Syria, formerly known as the al Nusra Front — which, with ISIS on the run, remains the most effective anti-government force in the country.

The Trump administration declares that it will remain in Syria for the foreseeable future — without even a fig leaf of legal cover. Although there is now no possibility for a jihadist victory, Washington seems intent on drawing out the war as long as possible. The truth is, Washington doesn’t know how to extricate itself, because to do so would amount to yet another admission of defeat, and lead quickly to the dissolution of the jihadist networks the Pentagon has so long cultivated.

Withdrawal from Syria — and, sooner rather than later, from Iraq, whose parliament this month called for a timetable for U.S. forces to vacate the country — would totally unravel U.S. strategy to dominate events in the oil-rich region. Obama launched the jihadist war against the Syrian government in 2011 to force his way into the country. ISIS’s seizure of Mosul, Iraq’s second largest city, gave the U.S. the opportunity to return to that country, militarily. There will be no third chances, in Syria or Iraq.

The American people will not stand for another such adventure. They feel tainted by the experience in both Syria and Iraq, and don’t trust what their government says about the “good guys” and the “bad guys” in the Arab world. If only for reasons of racism, they want out.

Everyone smells U.S. defeat, inside and outside the empire. It is a stink that only Americans that were conscious in the Vietnam era can remember. It makes folks anxious — like the loss of a cocoon. Just as whites reaped a “psychological wage ” from Jim Crow privileges, according to W.E.B. Dubois, even if they were poor, so do citizens of empire feel psychological benefits, even when the cost of the war machine is impoverishing the country. U.S. politics in the era of imperial decline will be nasty, stupid, petty and racist — just as we are already experiencing. There must be scapegoats for the national de-exceptionalization. The Russians fit the bill, for now, and so does anybody that talks like a Russian, or a Chinese — for example, people that would like to live in a “multi-polar world.”

Do not expect the Republicans or the Democrats to make any sense of a world of diminishing empire. The duopolists are incapable of seeing any future beyond their rich patrons’ vision –- and the rich have no vision beyond continued accumulation of wealth, which requires a harsher and harsher austerity.

Most dangerous, they cannot imagine a world in which they are not on top. We will have to fight to keep them from blowing us all up, in rich man’s despair.

← The Fools on the Hill: From M.A.D. to Madness
The Obama Presidency →