Gangsta Rap: Cognitive subversion from below

Up until the 1990s the cognitive linguistic changes imposed on the black community were benign and ostensibly positive. Switching from the term “Afro-American” to the term “African American”, as the proper, official, sanctioned form of reference, underscores black Americans’ African heritage; certainly something to be proud of. Capitalizing “Black” likewise engenders a sense of pride. In the 1990s, however, the changes were not so benign, nor did they originate with the black intelligentsia. Quite the opposite. The essence of these new terms  -words like “bitch”, “ho'”, “motherfucker” and “nigga”- were not pride but degradation. These changes came from below, literally from the gutter. This was the language of the street and it became  the language of an art form known as  Gangsta Rap. This music and hence this language (as Anonymous reports) was promoted by powerful shadowy forces, whether government or corporate. They wanted this language and this ideology proliferated.

With Gangsta rap, profanity and racial slurs were made legitimate lexemes of artistic expression. I think this is the greatest success of the elites’ cognitive subversion assault: the glorification and financial promotion of the language of the street through this art form and with it  the normalization of black degradation, particularly with the word “nigger”, or, as the Neo-Blacks call it “nigga”. For them, spelling it with an “a” relieves it of its racist connotation making its use acceptable. Never mind that the “n-i-g-g-a” rendering of the word used by Gangsta Rap artists and popularized on the Internet is the same word as “nigger” with a black accent, or as some might say in black dialect. It’s the same word. Pronouncing “er” as “a” is simply a black American way of speaking. It was the Neo-Black Gangsta Rappers that decided we should start writing it the way it sounded. This wasn’t always so. For example, the person most responsible for use of the word in modern entertainment, did not spell it that way. 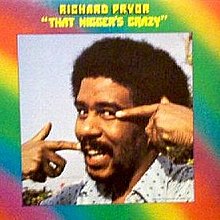 Richard Pryor’s hit album was not “That Nigga’s Crazy”. It was “That Nigger’s Crazy”. Sure, with the black accent, it sounded like he was saying “nigga”. But nobody wrote it that way until Gangsta Rap and the Neo-Blacks. That way of spelling the word is another identifying trait of the Neo-Black.

As a man thinketh, so is he, to paraphrase the Bible. If you can change the way a person thinks about and defines himself you can essentially control that person. With this linguistic cognitive subversion  in place the stage was set for the Neo-Black era. Emerging out of these seemingly opposing aspects of linguistic manipulation  –from above and from below, from the intelligentsia and from gangster culture,  “positive” and negative–  Neo-Black culture can be said to have two wings: the ostensibly optimistic and the pessimistic. Though there is nothing optimistic  about either in terms of a healthy black identity.

← “Black Panther” (the movie): Racist tropes
Get Me the Hell Outa Wakanda! →