These Birds of Prey Are Deliberately Setting Forests on Fire

“Fire is supposedly so uniquely human.”

It’s pretty hot in Australia right now. A brutal heatwave that’s incinerated temperature records threatens devastating bushfires – and to make matters worse, authorities have to contend with an ancient breed of flying arsonists that may as well be miniature dragons.

These flying firestarters are spread across at least three known species 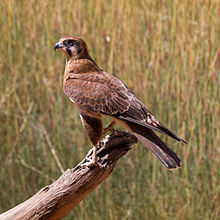 – but while their hell-raising may be observed in Indigenous knowledge, that’s not so elsewhere.

“Though Aboriginal rangers and others who deal with bushfires take into account the risks posed by raptors that cause controlled burns to jump across firebreaks, official skepticism about the reality of avian fire-spreading hampers effective planning for landscape management and restoration,” the international team explains in their paper.

While news of aerial arsonists fire-bombing the landscape may seem surprising or even shocking, the researchers are eager to emphasise that this destructive phenomenon has actually been witnessed for untold millennia.

“We’re not discovering anything,” one of the team, geographer Mark Bonta from Penn State Altoona, told National Geographic.

“Most of the data that we’ve worked with is collaborative with Aboriginal peoples… They’ve known this for probably 40,000 years or more.”

According to the team, firehawk raptors congregate in hundreds along burning fire fronts, where they will fly into active fires to pick up smouldering sticks, transporting them up to a kilometre (0.6 miles) away to regions the flames have not yet scorched.

“The imputed intent of raptors is to spread fire to unburned locations – for example, the far side of a watercourse, road, or artificial break created by firefighters – to flush out prey via flames or smoke,” the researchers write.

This behaviour, documented in interviews with the team and observed first-hand by some of the researchers, sees prey driven toward the raptors by a wall of flame, enabling them to engage in a feeding frenzy upon fleeing or scorched land animals.

The inspiration for the study came from a passage in the 1964 autobiography of Indigenous doctor and activist, Phillip Waipuldanya Roberts.

“I have seen a hawk pick up a smouldering stick in its claws and drop it in a fresh patch of dry grass half a mile away,” he said, “then wait with its mates for the mad exodus of scorched and frightened rodents and reptiles.”

Of course, as any law student knows, crimes not only entail a physical component, but a mental one.

In this case, do the birds really know what they’re doing, or are they only accidentally clutching at (burning) straws?

The researchers think the former is the case, saying accounts of multiple witnesses suggest this behaviour is not a fluke – and even more scary, it looks to be coordinated like a pack hunt.

“It’s not gratuitous,” one of the team, Australian ethnobiologist and ornithologist Bob Gosford, told The Washington Post in 2016.

“There’s a purpose. There’s an intent to say, okay, there are several hundred of us there, we can all get a meal.”

If the hypothesis is correct, it means we finally have confirmation of a new force in nature that can spread devastating wildfires – and local Indigenous people knew it all along.

“The birds aren’t starting fires from scratch, but it’s the next best thing,” Bonta told The Washington Post.

“Fire is supposedly so uniquely human.”

The findings are reported in the Journal of Ethnobiology.