I do not want to see no UFO

This is what I wrote on the second anniversary of my one and only UFO sighting.  I have the original account in a paper diary somewhere. I’ll try and find it. Tomorrow is the tenth anniversary.

July 7, 2009 · by nomad · in Uncategorized · Leave a comment ·Edit
I do not want to see no UFO
Please
Show me some wings

You can’t be up there without them things.

I officially became a kook two years ago this day. I looked up and saw what appeared to me to be a jet liner. I didn’t pay it much attention at first. Ive seen this sight countless times. But there seemed something odd about this one. I immediately realized that it was because it had no wings or tail. I watched it for three or four minutes until it disappeared over the horizon.
As I found out later indeed some UFOs sighted in the past have been described as similarly (“cigar”) shaped.
As unbelievable as such a sighting already may seem, it was made even more unbelieveable when I decided I wanted to “commemorate” the date that I saw it. As I jotted down the date the numbers jumped out at me: 7-07-07. But wait, it gets better. I looked at the clock and it was a little past 7:00 a.m. (Yes I used to get up early). And not only that, it was Saturday the 7th day of the week. How ironic. If I were to tell somebody this story, they would likely think the alignment of sevens a bit too coincidental to be taken seriously: I’m just a UFO nut who’s into numerology.
But that’s what happened. At 7 a.m. on the 7th day of the week in 7-07-07, I saw a UFO. 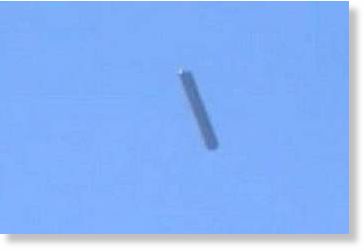 ← HERSH; CENSORSHIP — Aangirfan
Why CNN’s Downfall May Be The Most Significant Thing In The World Right Now — Counter Propa →