Image of the Day: Predictive Programming 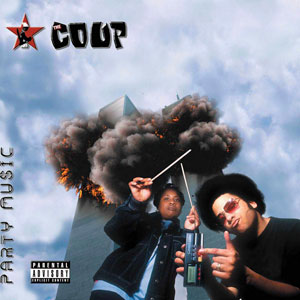 this is pretty much my favorite predictive programming image..

Dang!
The cover for Oakland-based group The Coup’s Party Music was created in June 2001

Very predictive. And practically immediately before the event.

In 2001, The Coup released Party Music to widespread praise. However, in part because of distribution problems, sales of the album were low. The original album cover art depicted group members Pam the Funkstress and Riley standing in front of the twin towers of the World Trade Center as they are destroyed by huge explosions, and Riley is pushing the button on a guitar tuner. The cover art was finished in June 2001 and the album was scheduled to be released in mid-September.[2] However, in response to the uncanny similarity of the artwork with the September 11, 2001, attacks, the album release was delayed until November of that year with the cover featuring a hand with a flaming martini glass.