Today seems to have been a chemtrail free day. It’s certainly possible, but hardly. I know how quickly the sky can transform. I was unable to go or even look outside for nearly six hours today. And though I saw no chemtrails on my morning commute to my destination, anything could have happened in that six hour interval. There could have been a massive chemtrail bombardment that has since cleared up; or something less dramatic. I just don’t know. But at 4:00 PM, a pastel blue sky is inundated with cumulus clouds with no apparent signs of chemtrails. True, the frayed edges of the clouds and the paleness of the sky suggest the presence of ambient aerosols from earlier sprayings, but there is only a hint of the streaky film that is characteristic of residual recent aerosol spray. And there are no translucent cirrious clouds accompanying the cumulus clouds. No sea of mists.  No chemtrail day? I don’t know. But I see no signs of chemtrails. Starting….now!

6:30 PM. That didn’t take long. About two hours later, most of the cumulus clouds are gone, the sky is a shade or two paler and long wide swaths of spreading chemtrails  crisscross, barely visible against the bleached background, which is why I have not attempted to photograph them. But it is just as I said. The sky can change dramatically in a very short period of time. And the engineers are deploying a lot of quick dispersing aerosols so that chemtrails are less likely to be noticed. Hence the engineers  can work an alternating pattern, of spraying, simmering or clearing, and repeat. They can do this several times a day. That means that they can bombard us with chemtrails during working hours and most of the people in the US would be unaware.

7:00 PM. Now, about a half an hour later, there is enough contrast to capture the spreading swaths in the west. This massive swath of translucent clouds is apparently  the intersection of only two chemtrails. 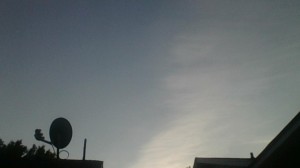 They must be using the extra thick formula.

The same demi-cloud  at 8:00 PM. You can barely see it but it is being reinforced with yet another chemtrail. 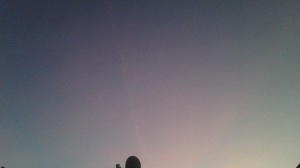 Again, a pastel blue sky full of shaggy voluminous cumulus clouds. No sign of direct chemtrailing. And today I have not been sequestered as I was yesterday. 2:30 PM.